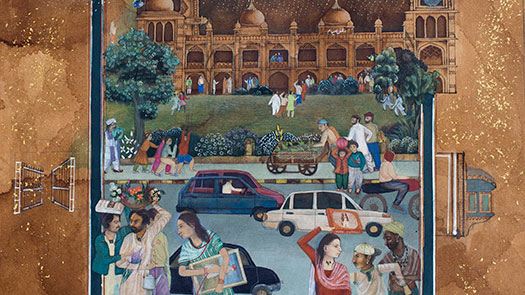 Rasheed’s practice has its roots in the Indo-Persian tradition of miniature painting, but like many of her contemporaries, she has rejected traditional subjects for modern ones. Her work explores human rights in a society where ones existence is defined by gender, taboos, traditions, religion and culture. It unravels individual or collective memories and experiences in visual form, with an empathetic outlook that hopefully stimulates recognition for a collective effort for change.

Some of her work is deeply personal drawing on her own remembered experiences, like the constrictive conditions placed on female children forbidden to play on the streets after a certain age, and how this solitude, for her personally, led to endless hours of drawing. The exhibition at The Alexandria Library will feature work from her series "Creative Women" and "Walk to School” and is presented alongside new works, created in response to this year’s festival theme "Who do you think you are?" produced especially for Asia Triennial 2018. In conjunction with the exhibition Saima will also be hosting a day workshop in which remembers of the public can learn how to create their own miniature painting, using the traditional techniques (gouache and gold leaf) employed by the artist.

Saima Rasheed was born in Lahore, Pakistan, in 1976. She received her BA from the National College of Arts in 2000. Since than, She has had exhibitions in Pakistan, France, Sri Lanka and Uk. Recently she was short listed for the Sovereign Asian Art Prize, Hong Kong 2018. In 2016, She was invited to display her work at the Colombo Biennale. In 2004, Rasheed was artist in residence for a month at the Ecole de Art, Aix-en-Provence, France. During her residency, she held workshop, presented a talk and produced a group show. She is also a 2006 recipient of The Arts Council of England Award for an exhibition at The Bhavan Centre, London.