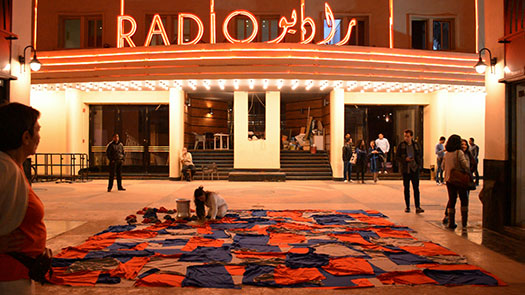 The idea of Europe is under threat. Brexit will see the UK separate itself from Europe, while global conflict, often the legacy of European colonialisation, has created an influx of refugees trying to enter Europe, all of which has contributed to the growing power of the political far-right. With Na Cl O, Romina De Novellis uses a torn European flag to literally wash the floor, metaphorically washing away the problems of the present and the past, a deliberately futile gesture that highlights these ongoing political tensions and the potential breakdown of international relations.
OP-ject Ambiguity series no. 7, Jin Eui Kim, 2015

Romina De Novellis artistic work is on the concept of the body in terms of public processions, installed in urban spaces and followed by the gaze of passers-by. Gesture is at the center of these paintings that come to life through her body. Her aim is to show how a state of trance, alienation and madness, can manifest on the body, especially in the precarious human conditions that exist on the margins of society (related to employment, wide social networks, and family). Women, Saints, Daughters, Icons of everyday life, the protagonists of Romina De Novellis's work originate from her studies in anthropology and ethnomusicology.